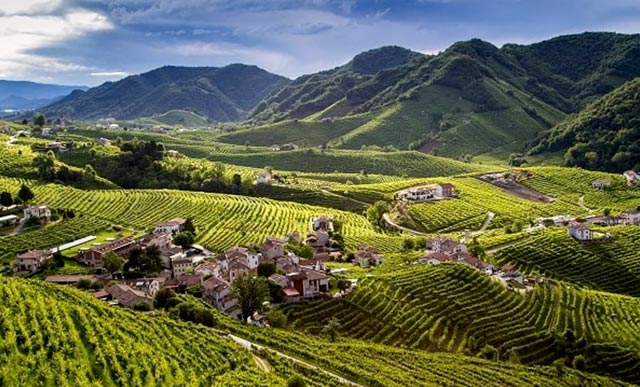 On 7th July, during the 43rd session of World heritage Committee, hills of Prosecco were declared World Heritage by UNESCO. The well-known hills that characterise the area of Conegliano Valdobbiadene are now the 55th World Heritage site in Italy, as also the Lange area in Piedmont, Venice and Rome.

The area of Conegliano Valdobbiadene has now to be protected, looked after and preserved by the inhabitants so that it can be passed on to the future generations. We now portrait a region of inestimable and universal value.

The Prosecco hills were firstly presented as candidate for UNESCO World Heritage in 2009, and in the long journey that led them to obtain the identity of World Heritage there have been difficulties but enthusiasm and dedication made all this possible.

So now at the dawn of the 50th anniversary of the DOC denomination, created in 1969, that in 2009 changed into DOCG, we are now celebrating the qualification that these breathtaking areas have obtained.

The site “Conegliano Valdobbiadene Prosecco Hills” is located on the north east of Italy, in Veneto region in the province of Treviso. It’s a small hilly area where the bond between human being and nature created an unique landscape. The area that was candidate at the World Heritage of UNESCO consists of a hilly belt that goes from Valdobbiadene town to the east village of Vittorio Veneto. Therefore a great slice of the landscape connected to the “Conegliano Valdobbiadene Prosecco Superiore DOCG” is included inside the World Heritage panorama.

The main aspects that are now to be preserved and protected are three.
The area is characterised by a particular geomorphological conformation known as “hogback”, a series of steep, rugged slopes extending in an east-west direction, interspersed with small parallel-running valleys. Over the years the area’s inhabitants have learnt to adapt to his harsh environment, shaping its steep slopes, while perfecting their agricultural technique.

The particular ability to adapt has, indeed, defined the second aspect of uniqueness of this area: the Ciglione is the particular type of terrace created by the growers of the hills. the terrace created is covered not with stones but with grassy soil, that helps to reinforce the slopes and reduces the soil erosion.

Third unique side of these hills is the mosaic framed work carried out on the slopes. the work of thousands of small-scale wine producers has allowed for the creation of a multifarious agricultural landscape both in terms of form and composition. The “patchwork”created by families in the area is interspersed with wooded areas and unproductive elements, making up an effective ecological network that provides quality ecosystem service.

The areas recognised as World Heritage by UNESCO are three: the core zone, the buffer zone and the commitment zone.

The core zone makes up an area of 9,197.45 ha, and includes the hilly land that falls within the Valdobbiadene, Miane, Farra di Soligo, Pieve di Soligo, Follina, Cison di Valmarino, Refrontolo, San Pietro di Feletto, Revine Lago, Tarzo, Vidor and Vittorio Veneto municipal areas. This area is considered the one of main interest because it contains all the three aspects of uniqueness.

The buffer zone includes the hilly land that falls, in addition to all the other municipalities of the core zone, with the Conegliano, Susegana and San Vendemiano municipal areas. This area is different from the core one, indeed it is more gently on the slopes.

The commitment zone is the area outside the core and buffer zones which includes a rather vast territory made up of municipal areas that have adhered to Memorandum stipulated with the Region aimed at adopting common regulations for the management, protection and safeguarding of the rural landscape, especially what concerns viticulture. 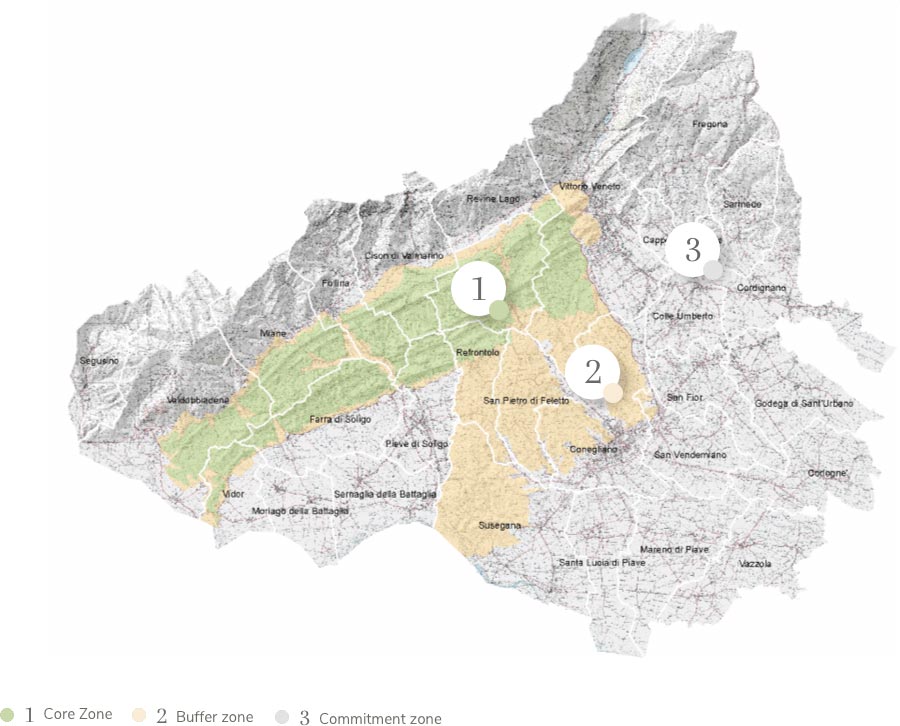